A federal perspective on public policy from our desk in Washington provided by Thomas Phillips, Congressional Affairs Specialist at Battelle.

Q: With a focus on education policy, where should we look now for the best insight into what’s coming next?

Q: What did we learn from those hearings?

On the Department of Education front, we learned a bit more about Dr. Cardona’s stances on STEM education. He spoke specifically to the need for better integration of STEM in the core curriculum, as well as the importance of demonstrating the role of STEM in workplace to help increase participation in STEM and computer science. We also heard from him on some broader, more contentious topics, such as reopening schools, standardized testing, and accountability measures in the face of the ongoing pandemic. Regarding reopening, he indicated that schools would need to take sufficient health precautions and have surveillance testing protocols in place. On the issue of testing, he said that he was not in favor of a “one size fits all” approach on waivers, and that assessments are necessary to provide targeted resources and support, while maintaining that states will have the opportunity to weigh in on implementation. While his answers didn’t please all Republicans on the committee, we can expect that his nomination will advance to the full Senate with bipartisan support.

On the Labor front, Marty Walsh’s hearing went over smoothly, also earning bipartisan support. He committed to advancing Democrats’ priorities on worker protections while maintaining his openness to crossing the aisle and working with Republicans on employer concerns. Importantly, Walsh called out an area of concern to both parties, noting that “each and every one” of the Senators spoke about the need for job training and preparing workers for the economy of the future. To that end, Walsh indicated his support for expanded job training and re-skilling efforts. We can expect that his nomination will also advance to the full Senate.

Q: Another key milestone will be the release of the administration’s budget request. Can you briefly remind folks how the federal budget is created?

Ideally, the budget process looks something like this flowchart. (And remember, this is just the first half of the Budget & Appropriations cycle; we’ll go through the appropriations process in more detail in a future post). 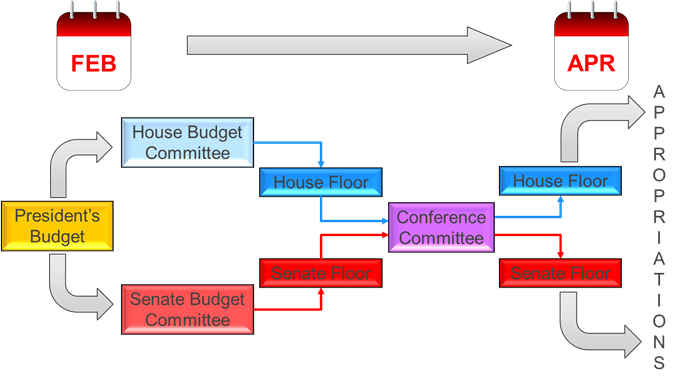 ​First, the Administration proposes their budget request for the upcoming fiscal year to Congress. Then, the House and Senate Budget Committees draft and amend their own budget resolutions. When that’s done, the resolutions are voted out of committee, and “sent to the floor” to be passed by each chamber. Once both resolutions have passed, a conference committee resolves the differences between the two resolutions, and the final product is once again voted on by the full House and Senate. At that point, the budget is set, and the Appropriations committee (and its 12 subcommittees) receive their allocations for the coming fiscal year.

Q: Where are we in that process now?

Because we’re entering a new Administration, this process is slightly delayed, but don’t fret – it happens every four years. Right now, we’re still waiting to see the Administration’s budget request. We’ll likely get a “skinny budget” in March, which includes most topline dollar figures, but not much programmatic spending details. Those details will come later in the spring, and will be released as they’re available from each Department. Remember that this is all for the upcoming fiscal year, FY22, set to begin October 1 st .

Q: What are likely areas of significant debate or agreement?

Right now, we’re seeing major debate play out on pandemic relief, as Congressional Democrats have leveraged the mechanism of reconciliation through FY21’s budget resolution to advance the substantial legislative package I mentioned above. Depending on how the rest of that debate plays out, and what level of relief is ultimately passed, additional relief could be at the forefront of the debates around FY22’s budget resolution. That said, we can also expect to see Democrats act decisively on climate change, a stated priority of the current administration, which will certainly cause a stir. However, in order to try and win some bipartisan support, there will likely be significant outlays for infrastructure investments – a Congressional priority for the last few years.

When it comes to education, the debate around when and how to open schools is likely to dominate the conversation. There is bipartisan consensus that schools need to reopen, but Republicans and Democrats are struggling to find agreement on what investments are necessary to make it happen, and safely. Luckily, there is significant bipartisan agreement around the need for STEM, and for broadening participation by increasing equity and access. Hopefully, we’ll see strong STEM support in the administration’s budget request; it will send the message that Congress needs to continue increasing its investment in STEM opportunities.

I’ll be presenting on the Budget and Appropriations process during the February STEMx Members’ Roundtable on 2/25. In the meantime, if you have any questions about STEM policy or advocacy, please don’t hesitate to reach out to me via email (phillipstd at battelle.org) or phone.